What is Modern Slavery?

Modern Slavery encompasses human trafficking, forced labour, domestic servitude and can have links to Sexual Exploitation. Traffickers and slave masters use whatever means they have at their disposal to force individuals into a life of abuse and inhumane treatment. Modern Slavery is a largely covert crime and victims tend to be controlled and hidden away.

Slavery is when someone is:

What is Human Trafficking?

It takes various forms and affects people of all ages, gender and races, with many victims targeted because of existing vulnerabilities including, learning disability, mental health problems and homelessness.

If you suspect this type of abuse is happening, you should report it to the Police or relevant Local Authority – they will make a referral through the National Referral Mechanism (NRM).

Poverty, limited opportunities, lack of education, unstable social and political conditions, economic imbalances and war are the key driving forces that contribute to the trafficking of victims into, through and across the UK. A common misconception is that victims are transported from another country into the UK, however people can still be trafficked from one Borough to another within the UK.

A specialist Modern Slavery/Human Trafficking Assessment Tool (Eight point checkilst) has been developed, this can be located on our Local Policies, Strategies and Procedures page.

What is Forced Labour?

Forced labour is any work or service which people are forced to do against their will, under threat of punishment.

It is most often found in industries with a lot of workers and little regulation such as:

What is Domestic Servitude?

Domestic Servitude is a specific type of forced labour and takes place in a private establishment. People may be promised employment and instead find themselves trapped in someone’s home with little or no money and coerced into staying for fear of punishment to themselves or their family.

What is Sex Trafficking?

Sex trafficking is the recruitment, transportation, transfer, harboring or receipt of persons who are under threat through force, coercion, fraud, deception or abuse of power and are sexually exploited for the financial gain of another.

Spotting the Signs of Modern Slavery

If you think you are a victim or work with or employ someone who may be a victim of modern slavery or forced labour you can call a helpline on 0800 0121 700 and talk through your concerns or visit: http://www.modernslaveryhelpline.org/

You can also download the Unseen App to report slavery: 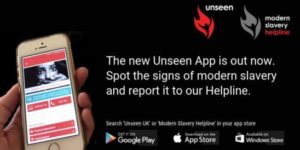 Links to Other Organisations

© 2018 Teeswide Safeguarding Adults Board.
We use cookies to ensure that we give you the best experience on our website. If you continue to use this site we will assume that you are happy with it.That’s finePrivacy policy